Article by Trupti Devdas Nayak, originally posted in Exploring The Blue Marble (check it out!)

“It does not get any better than this”. The thought ran through my mind as I looked at a big bowl of ceviche in my hand. Grabbing a tortilla chip, I dunked it into the ceviche and angled the chip until a generous helping made it onto the widest part of the tortilla triangle. I opened my mouth wide and put the entire chip and its delectable contents into my mouth. 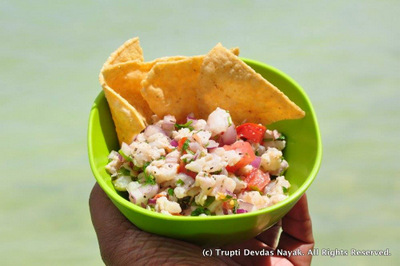 The explosion of flavor and texture as the freshly marinated fish mixed with the crunchy tortilla was incredible. I closed my eyes to savor this moment. We had spent all afternoon line fishing and this was our reward. Instead of singing for our supper, we were fishing for our lunch. 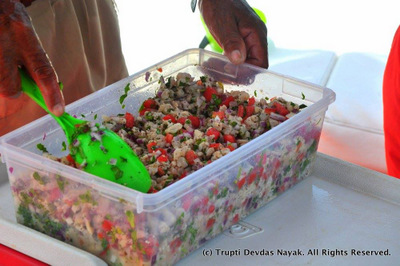 Ceviche is made from raw seafood like fish and shrimp that have been cleaned and then chopped into small pieces and marinated in lemon or lime juice to cure the meat. The fish is never cooked with heat, as it is supposed to be prepared and eaten as fresh as possible, akin to sushi. Chilli peppers and salt are added to ceviche for seasoning and spice, sometimes chopped onions and fresh cilantro is also mixed in to give it an extra punch in flavor. 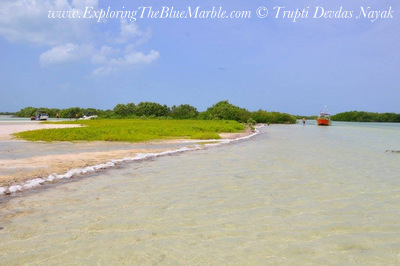 We were enjoying this fabulous ceviche in the middle of the Caribbean ocean, several miles off of the pristine coast of Isla Holbox (pronounced Hol-BOSH). This dagger shaped island is a 20 minute ferry ride from the tiny port town of Chiquila which itself is a 2.5 hour drive North from the busy party-central city of Cancun. Isla Holbox takes a bit of effort to get to, but it is absolutely worth your time. When you step out from the ferry onto the pristine island, it’s immediately evident that Isla Holbox is a world apart. 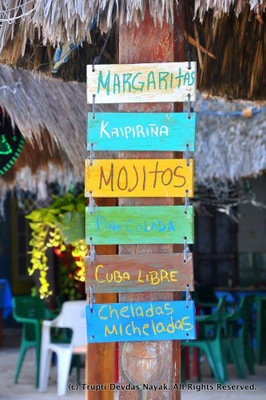 Isla Holbox is paradise for those that come to relax

Travelers in the know frequent this place for its easy going vibe, friendly locals, fishing village quaintness and a variety of activities and adventures, all of which you can choose to ignore in favor of a day spent bumming on the beach. There is nobody around to judge you. 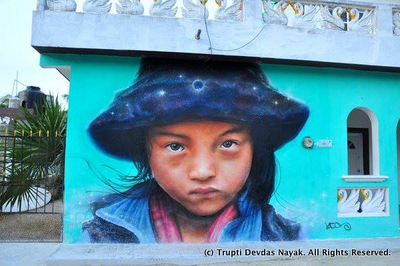 Isla Holbox does not allow cars on the island, which might seem like a short-lived annoyance, but is actually aboon in disguise.  No cars means no traffic, no stop signs, no red lights, no pollution and no honking and no noise. Bikes and Golf carts are the choice of conveyance and they are a ton of fun to ride around the island. From the ferry dock, most people hop onto a golf cart with their bags and request the driver to take them to their hotel on the island. It is inevitable that gorgeous murals and larger-than-life street art will catch your eye as you swing through the bumpy roadways on Isla Holbox. You can read more about the island’s stunning street art in a detailed post here. 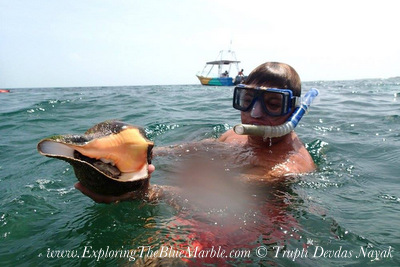 Holbox might ring a bell if you are into adventurous experiences and have heard about the largest fish species in the world: Whale Sharks. We were on Isla Holbox towards the end of the peak whale shark season. Every year, from June to mid-September, huge schools of Whale Sharks congregate off the waters of Isla Holbox. These enormous creatures, that can grow to lengths of 40 feet, look scary (any creature with a 5 foot wide mouth would!) but in reality are harmless and approachable. We were eager to snorkel with the whale sharks because some of them were still hanging out near Holbox in mid September. Alas, the rough sea played havoc with our plans. It would have taken too much effort to go further out to the sea to avoid rough waves and try to see the whale sharks. Since we had only one day, most of the whale watching tours were cancelled in lieu of another more amenable activity. Fishing! Now, who can say no to that? 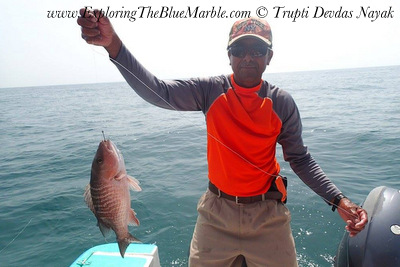 Our captain Pablo shows off his catch

The waters off of Isla Holbox are rich in marine life. VIP Holbox had planned a wonderful day out on the sea for us. We hopped onto a fishing boat with our captain Pablo Ávila and guide Gustavo Morett. The plan for the day was to show us around the coastal beauty of Holbox, while fishing for our lunch, snorkeling in the ocean andmooring at shallow mangrove-laden picturesque sandbars off the coast. Our captain Pablo showed us how tohook the bait onto lines and reel them out into the sea, one by one. 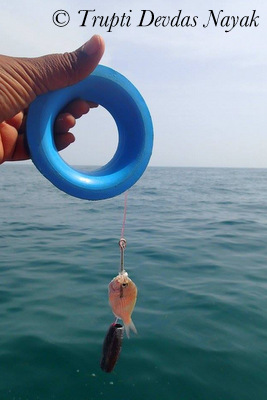 Baited the line and reeling it out to sea

As is always true in the food chain, the bait was smaller fish. We hooked it onto one end of the line and addedsome weights to ensure the bait would remain submerged in the water. The aim was to get bigger fish to bite the bait and get hooked. The moment we felt something tugging the line, we had to quickly reel it in. 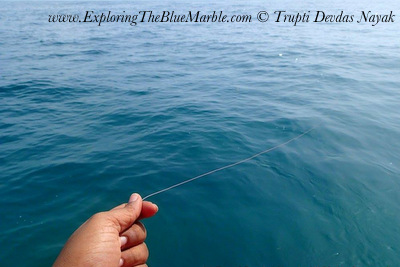 They say fishing is an activity enjoyed mainly by those with oodles of patience and it became quickly evident that the fish were not jumping out of the water eager to bite our bait. We reeled out the lines and waited. And waited. And waited. Soon, a lucky fellow traveler on our boat got a bite! Soporific patience immediatelytransformed into squeals of excitement and industrious activity. Our guide showed us how to reel the fish in, and soon we had a brilliantly colored grouper on our boat. 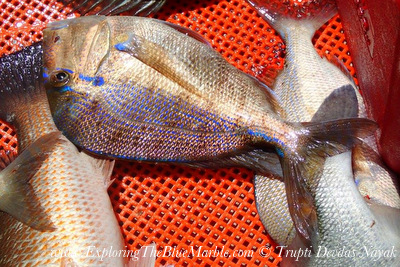 Proud of our catch!

Once the first fish was caught, we knew we were getting into marine-rich waters and that there were dozens if not hundreds of fish in the ocean below us. We let out more lines and waited. Within an hour, we had a respectable catch of atleast a dozen fish. 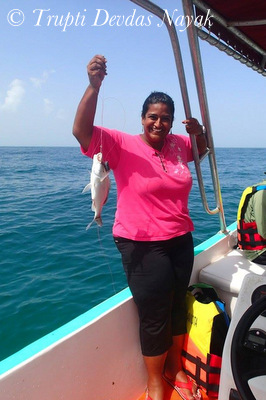 Our freshly caught groupers and snappers were filling up the floor of our sunny boat deck! Our tummiesrumbled with hunger, reminding everybody of the seafood feast that awaited. While VIP Holbox‘s multi-talentedcaptain Pablo and our superb chef and guide Gustavo got busy on the boat making ceviche, we docked at some sandbars and waded out into the turquoise water. Seagulls were squawking overhead, having seen and smelt the fish. We spotted mangroves in the distance as we walked out on the shallow ocean floor. 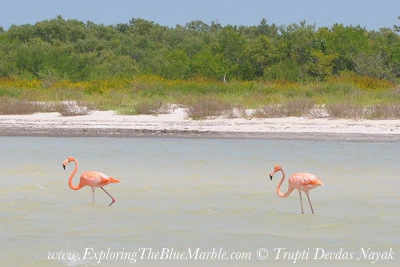 Pink flecks moving about near the coastline seemed like a mirage before we realized we were looking at pink flamingoes! These birds flock around on Isla Holbox, at home in paradise. Dozens of these birds were along the coast, balancing on one leg, preening themselves, while some were hunting for food in the shallow waters.

Delicious ceviche, the best we’ve had!

Our ceviche was soon ready. Our captain and guide had prepared a big container with fish (that we had just caught!). They had marinated it well in lime juice, seasoned it with salt and green chilli peppers, and added finely chopped onions, tomatoes and cilantro for added flavor. Big bowls of this delicious meal were passed around. Packets of crunchy tortilla chips accompanied the ceviche. We used the tortilla chips like spoons to scoop up the ceviche. As everybody took their first bite, oohs and aahs and sighs of delight filled the air. This had to be the best ceviche we had ever had. It couldn’t get any better than this. 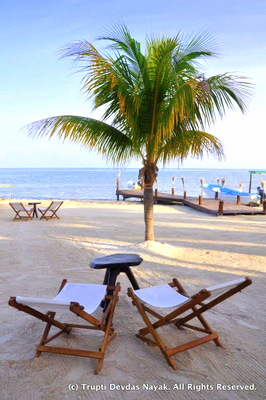 A perfect day comes to a close on Isla Holbox

It’s food for thought how a perfect day sometimes doesn’t even involve the main event that had been planned for it. We didn’t get to swim with whale sharks due to high winds and rough seas, but thanks to VIP Holbox we got to fish for grouper and snapper. We prepared and ate ceviche using the fish we had caught. We sawhundreds of pink flamingoes in shallow mangrove-lined backwaters. We cooled off in the ocean while snorkeling. Later that afternoon, we rented a golf cart and drove all over the island, watched the sunset and saw the stars pop out. After a memorable dinner at CasaSandra Boutique Hotel (read my post on CasaSandra here) we ended the night with Mexico’s Independence Day celebrations while hanging out with joyous locals. Pretty much a perfect day in my book. Thanks to Willi Torfer, Pablo Ávila and Gustavo Morett from VIP Holbox for making sure we had an amazing experience savoring the natural beauty of Isla Holbox and all that it has to offer. You make the best ceviche!

~ Trupti (Traveler . Writer . Photographer . Artist . I write about outdoor adventures at http://wanderlustandlipstick.com/blogs/trailbound and my travels at http://www.exploringthebluemarble.com)

Disclosure: My visit to Isla Holbox was possible thanks to Cancun CVB and TBEX. Regardless, everything I have said in this post reflects my honest observations and opinions.